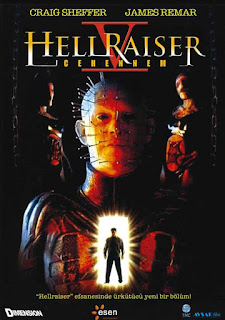 Wow.  I definitely wasn't expecting that.  Outside of Hellbound, I'm not a huge fan of the Hellraiser series.  They have some good gore effects but that's about it.  The stories leave much to be desired and they rarely differ from pointless S&M and weird visuals.  Sure, the first is another exception but it's so dated that it's hard to even watch nowadays.  That's a remake I'd more than welcome.

I wasn't expecting the crazy path that this film takes.  At first I couldn't believe they'd have such an unlikeable asshole as the lead.  It's a risky move since then it almost immediately leaves the audience wanting him to die.  Yet by the end of his journey, you actually feel bad when the big twist comes along.  The twist, by the way, is brilliant.  And seeing as how this is a rare gem in the Hellraiser series, I'm not going to spoil it since chances are you haven't seen it.  It's impressive though.  Damn impressive.

The way the story unfolds it feels like it was original screenplay that was then turned into a Hellraiser movie.  Sprinkle a cenobite here, a cenobite there, top it off with some Pinhead and you have a total runtime of five minutes that just barely makes this a "Hellraiser" movie.  Which is why I think it's so good.  It's mainly a psychological thrill ride and doesn't try to delve too deep into Pinhead as a character, which is where the series tends to get weak.
at October 31, 2012
Email ThisBlogThis!Share to TwitterShare to FacebookShare to Pinterest