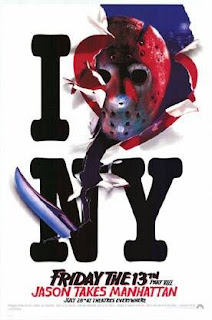 Thank you AMC for your lovely FearFest.  If there's one thing I needed it was repeated viewings of the various Friday the 13th movies.  Oh except for the fact that all the best parts are cut out since it's cable AKA no blood, no boobs and no cursing.  Wait, so then why would we even think to watch them given their castrated state?  I, for one, am just happy to see horror movies on TV.  Before this October the only horror films I ever saw came straight from SyFy (ugh) or MTV's World Broadcast Premiere of the Scariest Sorority Movie Ever: Sorority Row.  Yeah, times have sucked for a horror fan with a television set.  So I see this as a good opportunity for those young'n's who maybe can't quite watch Rated R films yet.

Like the 80's?  Well so does this movie and judging by all the elements, it was made by someone like me: Someone who likes everything about the 80's and yet hasn't even lived in that decade.  It's just plastered all over the place and done so in such a ridiculously sloppy matter that it's hard to take seriously.  Which is good though because the last thing you want to do is take this movie seriously.  I used to consider it the "worst" in the series yet now I can't help but love it for that very ridiculousness that made me once hate it.  To any of you who disagree and call this film garbage, I just have two words for you: Teleporting Jason.
at October 29, 2012
Email ThisBlogThis!Share to TwitterShare to FacebookShare to Pinterest