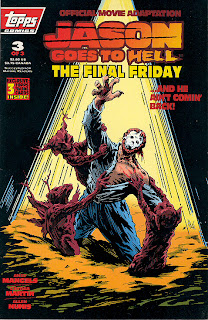 God dammit.  Seriously, god dammit.  I told myself I'd never watch this movie again yet here I am, day eighteen of my series and it happened.  And I hate myself for it too.  This movie sucks.  Hell, just look at the picture I used for it, it's the comic adaptation.  I can't even put up that godawful poster that has been on every promotional piece you've ever seen for this movie.  I just can't do it.  I feel like that gives the filmmakers more credit than they even deserve.  It's that bad.

This is not a Friday the 13th movie.  This is someone's version of a possession film with no idea what a F13 movie is.  They try to make up for this fact with a cobbled together scene at the beginning at Camp Crystal Lake yet even that doesn't work.  I really can't figure out what this movie is trying to pull off.  Maybe by tricking people into watching it based on franchise familiarity they can show them a whole new take on the franchise?  Yes, because that worked so well with Halloween 3.  But even that is hard to compare to because Halloween 3 is actually good; this movie blows.

The problem I have with the film isn't that Jason is barely in it.  It's not that the characters are stupid beyond any reasonable explanation.  It's not that this film jumps around more than should ever be deemed possible.  And it's not that this film gives a whole new meaning to the term 'plot hole.' Oh wait, it is all those things.  This movie is garbage and I implore you to pretend it doesn't even exist.  You'll be better off for it.
at October 29, 2012
Email ThisBlogThis!Share to TwitterShare to FacebookShare to Pinterest