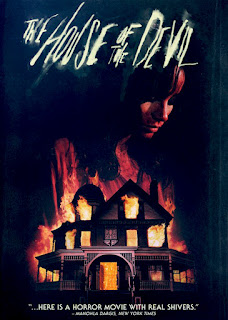 5. The House of the Devil

Was recommended this one recently and, in all honesty, I thought this movie was from the 80's.  It's just immediately what popped in my head when I saw the cover.  Which I suppose is kudos to Ti West, since that's exactly what he was going for.  This movie feels like it was released alongside many of Carpenter's and Hooper's (hahaha) best.  And for that alone, I certainly can appreciate the care that was put into making it like those films.

Unfortunately though, I can't say I was a big fan of the film.  It moved at a snails pace and didn't really seem to have an idea where it was going.  I just kept waiting for something interesting to happen but nothing really does till nearly twenty minutes till the end.  And I saw the twist coming a mile away.  I will admit, I really liked the climax, but that was until the resolution settled in.  If they had just kept it faded to black, I would have liked the film.  Slow?  Sure.  But it would have been forgivable.  With the given ending though, the movie had no balls.  It manages to be just like many of the other movies that tried to mimic the success of Halloween/Friday the 13th/etc, it just fades in with the rest.
at October 05, 2012
Email ThisBlogThis!Share to TwitterShare to FacebookShare to Pinterest