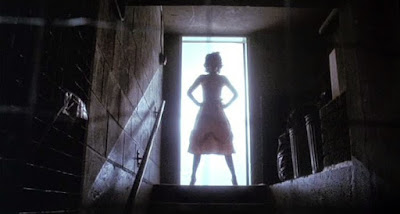 The first one was pretty by the numbers but this one is where shit goes full bananas. Much like Slumber Party Massacre 2, this sequel decides to take a rather dull original and go as crazy as possible with its sequel. In fact, this movie is so much like SPM2 that it could almost serve as a visual sequel. We've got a ghost killer who is out to fuck shit up in the craziest way possible and... I'm all for it.

There's a particular scene where the first victim is crying to her friend in the shower and I was actually surprised by the acting. For a movie like this, it rarely comes across this well. Later, this girl later gets killed by getting hanged then thrown out a window but they tease cutting her head off with a paper cutter and I was really hoping it'd happen just because it seemed cool. Was this a callback to the original? It feels like something I've seen before, and I can practically see the paper mache head but can't recall if this was supposed to be a throwback or not. For the sake of the writer's, I'll say it is.

These people are crazy. They care more about prom than they do murder or people coming back from the dead. Prom is apparently the most important thing that has happened or will happen. I guess I should expect as much from a film titled "Prom Night."


Next Up: The Babysitter
at October 15, 2017
Email ThisBlogThis!Share to TwitterShare to FacebookShare to Pinterest