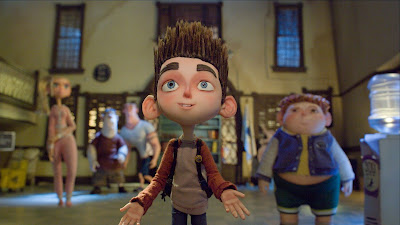 Every now and then I like to stray away from the horror to some more Halloween-y stuff like Hocus Pocus. This year I figured a prime candidate would be a Laika film that I don't really hear too much about these days. It seems to have kind of disappeared a bit and I wanted to bring a little attention to it because...well...it's damn good.

It's one of those movies that unfolds in such a clever and satisfying way that you want to watch it again the moment its over. It may just be my love for animated movies but there's a certain quality that Laika brings to the table that is really only matched by Pixar. They manage to handle the material in a way that's both adult but not too scary for the kids.

The voice cast is also really great with Kodi Smit-McPhee, Leslie Mann, Jeff Garlin, Anna Kendrick, and Casey Affleck. Seriously, look at that cast. I'm really surprised that this movie didn't do better than it deserved. As someone that is completely obsessed with horror movies, I can only imagine how head over heels I'd be for this movie as a boy. It really hits that young horror fanatic chord.


Next Up: Gerald's Game
at October 18, 2017
Email ThisBlogThis!Share to TwitterShare to FacebookShare to Pinterest