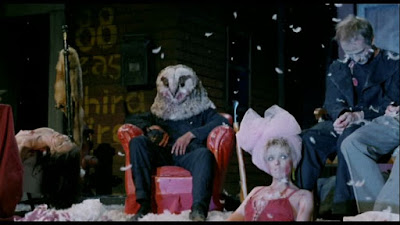 I love the concept of this movie. Having a theatre troupe lock themselves in the theatre to practice is the perfect way to do an Agatha Christie style story. Add to that the fact that the killer's identity is one of a deranged former actor. I just love that.

Unfortunately, the direction comes across more like a TV movie than anything that can be taken seriously. Which is too bad because the potential is certainly there. There's just a lot of nothing happening, when there could be easy suspense. I have a hard time faulting them though because its clear this film was made for peanuts. It doesn't matter though...

Because this film's third act was fucking awesome! I made sure to include a picture above of the aforementioned scene and holy hell am I impressed. I just love the creepy imagery of the killer just sitting there amongst his victims as their practically on display. Even better is the whole theatre angle, making this whole set-up even more satisfying. There were so many great visuals from this scene that it's honestly enough to make this film a "Must Watch."

I love the killer's Owl costume. I'm not sure why but goddamn is that owl head creepy. Obviously it would be silly to have just a full blown bird costume, but the owl head on top of essentially a Michael Myers costume is pretty scary. The deaths are also pretty cool, albeit a little lacking in the red stuff. Still, there are several really cool murders. Hell, one guy gets his axe-wielding arm cut off by a chainsaw, only for the chainsaw to stop working and for the killer to finish the job with the axe. Hilarious.


Next Up: Friday the 13th Part 3
at October 12, 2017
Email ThisBlogThis!Share to TwitterShare to FacebookShare to Pinterest