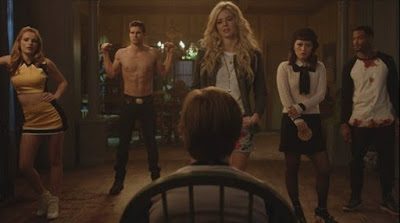 The concept of a young boy discovering his babysitter is actually a Satan worshipper trying to sacrifice him is a unique one that intrigued the hell out of me. Add Samara Weaving as the titular babysitter and I'm wayyyyy on board. Then you add McG.

And that's how you screw up a movie.

Remember how terrible Charlie's Angels looked? That Soap Opera look with awkward camera moves and even more awkward stunts? That's how this movie is. They do a continuous POV shot that is so laughable, it made me feel really bad for the production team. Usually the long shot is a source of pride as they are very hard to accomplish and dear god did this look bad. It was almost like being on a roller coaster ride rather than the POV of a child. Chucky did it better 30 years ago.

But don't get me wrong, it's not all bad. Weaving is fantastic as the babysitter, as are Robbie Amell and the other satan worshippers. The lead child also does a great job, but the entire tone of the film just feels off. Some of it lies in the script, which could have been a little more subtly clever rather than trying to beat you over the head with it. Most of it so clearly lies in the direction that it's baffling how McG continues to get work. Any movie that gives Weaving more exposure is a positive in my book though so I'd say this is just barely on the good side of mediocrity.


Next Up: Blood Rage
at October 16, 2017
Email ThisBlogThis!Share to TwitterShare to FacebookShare to Pinterest