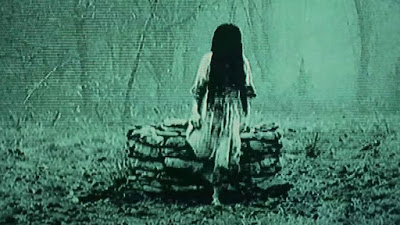 The only other film I can think of that had the sort of notoriety of this film was The Blair Witch Project, and that's because there's this weird video element to it at the time of release. People thought Blair Witch was real and, with this film, the terror came from a video cassette at the time when VHS tapes were still rented out. It added to the horror and made it even more terrifying.

Before I get into the actual film, I should probably let everyone know that I saw this film a grand total of one time, way back in Middle School. That's right. I had an annual Halloween party and at the first one, when I was only able to show R movies that were taped off of AMC, we watched PG-13 rated, The Ring. I honestly didn't remember much of it outside of the final few minutes but dammit did I recognize nearly everything due to a childhood obsession with Scary Movie 3. I made sure to separate the two as I watched but that didn't prevent me from laughing a few times as I thought of the parodied scene.

But you know what? This movie is fucking good.

I was actually kind of shocked how enthralled I was, since the storyline had permeated pop culture so much in the 2000's but still, I loved it. Naomi Watts delivers a great, if not ridiculously written performance. Seriously, this JOURNALIST has no problem showing the father of her child, the tape that she watched that is supposed to kill you in 7 days (which happened to do just that to her niece). So she's effectively okay with orphaning her child. You do you, girl.

One thing that shocked me was just how little Samara was used. I thought for sure that she had more screentime but, hell, the younger non-demon form has triple the screentime. Scary Samara doesn't even show up until the final few minutes. But dammit does she make an impression. I bought the film in a double pack with the second (which I've never seen all of) so I may end up giving that film a shot but I fear it'll ruin my enjoyment of the first, and I think I want to bask in that a little longer.


Next Up: Infestation
at October 08, 2017
Email ThisBlogThis!Share to TwitterShare to FacebookShare to Pinterest