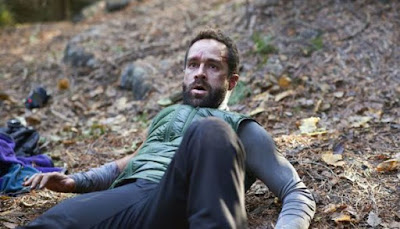 The concept of this movie is absolutely fascinating: What if a Bear Grylls type was documenting an expedition when something attacks him. I've been fascinated by this ever since stumbling across it on Netflix and I can probably thank Joe Rogan for that. Nature fascinates me in a way that it never really did before. For years I was often left turned off by movies that were set in a more nature-like setting just because I viewed them as boring. Never again.

The idea of being out, alone, in nature is pants-shittingly-horrifying to me. I definitely don't think that the film fully took advantage of this idea but I also think it's a hard one to pull off. The main thing is that our lead feels so in charge of the situation from the get-go that it's hard to be worried about him. He's so confident in himself that they had to throw in some crazy supernatural/alien element to really test him.

I didn't understand this.

You have the concept of a man being alone in wilderness, being hunted and toyed with, and yet you have to go some completely unbelievable route? Seemed odd to me. The intelligence of the creature is what lost me. I would have preferred a pure force of nature that is pissed off that this guy is in his territory. I thought that was more of what we'd be getting but instead, it was more of a guy being fucked with by some mysterious, intelligent beast.


Next Up: Backcountry
at October 05, 2017
Email ThisBlogThis!Share to TwitterShare to FacebookShare to Pinterest