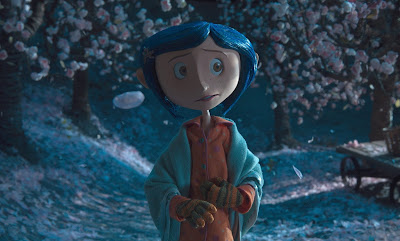 This one came a little later but that's mostly because I was busy seeing Mike Birbiglia last night so I couldn't prepare a review for beforehand. That show was awesome by the way but let's get to the good stuff. You know, because I'm sure so many of you have been waiting with bated breath.

I really forgot how good this movie is. I don't think I've watched it since viewing it on Netflix, way back during my Senior Year of college. I was blown away then and I was blown away now and so glad to have been able to practically see this for the first time, twice. Sometimes having crappy memory actually works out for the positive.

The subject matter is a lot darker than you'd expect a kid's film to tackle but then again, I'm not sure I'd even call this a kid's film. It's a little dark for that. I'd actually say it's more directed at teenagers, despite the stop-motion animation style. I believe this was the last practical film that Laika produced, switching over to the digital style, as present in ParaNorman. While I'm not one of those people that claim it loses its soul by going digital, I can appreciate the time put into the practical version.

If you haven't seen this movie, do yourself a favor and check it out. I've tried to avoid the plot because its just so damn good.


Next Up: Let The Right One In
at October 22, 2017
Email ThisBlogThis!Share to TwitterShare to FacebookShare to Pinterest