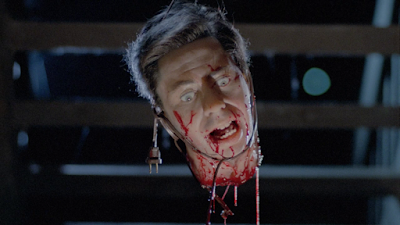 The main reason I picked this movie out was because of the above picture which made the film look like an effects extravaganza. And boy was it.

I feel like saying "oh boy" just made this take a strange turn. I take it back. It just comes off as weird an unnatural. And now I'm sure you're asking why did I just delete it and not have to write all of this stupid stuff? Because then I wouldn't be me. Okay, back to some Blood Rage.

I wasn't expecting the concept to be so well done considering it just seemed like a generic slasher film but it actually managed to be a very unique. There are two brothers and one of them murders a guy having sex and frames his brother, who is catatonic from witnessing the act itself. It's really interesting and, while not perfectly executed, was a welcome addition to my slasher library.

There's a decent amount of talking and strange exposition but I think the gore effects are worth sticking it out. And the characters are all just off enough that it


Next Up: ParaNorman
at October 17, 2017
Email ThisBlogThis!Share to TwitterShare to FacebookShare to Pinterest