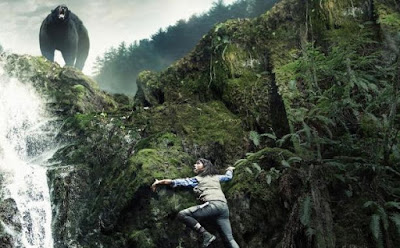 Bears are fucking terrifying. I'm not sure if you're aware of that fact or if you still view them as the cute and cuddley creatures that Disney has turned them into but I promise you, they are frightening. Any movie about a bear terrorizing people will immediately get my interest because of how much that scares me in real life.

After "Man Vs" I was really wanting a more grounded "survival in nature" kind of horror movie and this film did a better job delivering. I still don't understand why these films insist on adding all of these extra elements to somehow up the stakes even more. Is there any reason to have it be anything more than "backpackers get attacked by a bear and must survive in the wilderness"?

I thought it was hilarious when the lead guy got super defensive and mad when a fisherman came across their camp. He went into full blown macho mode and I couldn't believe how absurd it came across. Like...why would you be so suspicious of Eric Balfour's character when he's literally just another guy trying to get by in the woods. If anything there should be some sort of camaraderie. But no, instead it's very "Stay away from my woman!"


Next Up: Get Out
at October 06, 2017
Email ThisBlogThis!Share to TwitterShare to FacebookShare to Pinterest