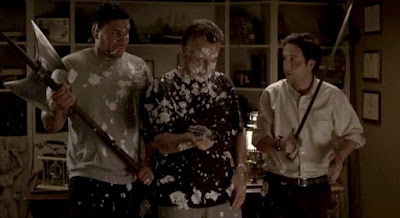 I always love me a good horror/comedy and the zombie genre has shown just how prime it is as a vessel for horror and comedy. Too bad I was completely wrong about what this film was about and the quality of the work itself. I thought I had stumbled upon an Odd Thomas/Jack Brooks-like gem that used the zombie genre as a backdrop. I was very, very wrong.

Instead what we have is a film about giant bugs that belongs on the Sci-Fi Channel (Sorry... SyFy). Actually, this may have originally aired there. It wouldn't surprise me. Either way, I'm not sure I can fully express my utter disappointment here. And it all stemmed from my own idiocy. This film didn't promise me anything and the title itself even says "Infestation" which my brain somehow interpreted as "Infection" and was pumped for some zombies.

Despite my mistake, it was still enjoyable enough. I almost always like Chris Marquette and Ray Wise is always great, but I could have used some better side characters. Hugo is one of the funniest characters in the movie just because of how emotionless and oblivious he is. He just really just seems to be wandering through the film aimlessly and, by the end, was really the only person I was truly rooting to make it.

The CGI was pretty terrible but, seeing it was made in 2009, I was shocked. This movie looks like it was made recently, and I honestly thought it was. Given the year, I can only imagine the budget (much higher than it'd be today, as effects were a lot in 09), and it makes sense as to why the bugs have limited screentime.

After making such a silly mistake with my movie choice, I'm kind of worried about some of my future choices...


Next Up: Jack Frost
at October 09, 2017
Email ThisBlogThis!Share to TwitterShare to FacebookShare to Pinterest