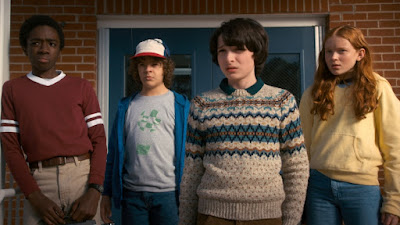 Here we go. I'm continuing from where I left off and attempting to finish the second season of Stranger Things. It's been absolutely incredible so far and I'm really excited about where this is gonna go.

The story between Nancy and Jonathan may be my favorite one going this season. I just find the entire thing to be so fascinating, especially with the addition of them going full on investigative journalist. They seem to have a lot better plans this season than their whole, Home Alone-style trap for the Demagorgan.

I knew when they introduced us to the idea of "Him" spying on them through Will that it'd be used and boy was it. Really seems like that tunnel system is going to lead to an IT-like finale and I'm so down for that. I love the different influences that this show takes on. Oh yeah, I guess I should talk about other parts of the episode.

I love this developing dynamic between Dustin and Steve. I can't say I was ever expecting to enjoy that pairing as much as I have. Though I'm pretty sure you could pair Dustin with just about anyone and it would work. He's just that kind of character.

Woah a whole episode devoted to Eleven? I feel like this is something that fans have been wanting since the shows inception and it came across...weird. Don't get me wrong, I really loved the look of the episode of the themes it explored but the tone shift felt very jarring. We went from a Spielberg movie to something else entirely and it really stood out amongst the other episodes this season.

This may seem like I didn't like it but believe me, I did. I really like that they're adding layers to Jane's personality (should I refer to her as that? It feels weird. I'm not sure if I'm going to. She'll always be Eleven to me. Wait. Is that the same as knowing someone by their holocaust number. It's not something she exactly chose or is a good memory for her... dammit.)

Also, tomorrow's entry won't be in right away because I'll be actually seeing the film tomorrow afternoon, so a 6am entry would be pretty impossible.


Next Up: Jigsaw
at October 30, 2017
Email ThisBlogThis!Share to TwitterShare to FacebookShare to Pinterest