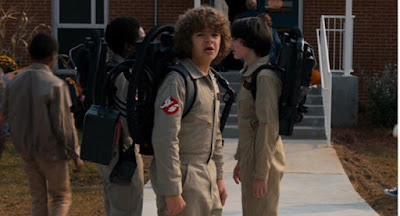 This review will be updated throughout the day as I watched the episodes. No promises that I'll finish the season all in one day but dammit, I'm pumped. This is a once in a generation show and cannot be missed.

Holy shit. This fucking show. I wrote that prior part before watching this episode and I can't say enough how true that statement is. There's no show quite like this and we're blessed to be around while its on. That's how good it is. Or as I like to put it: Breaking Bad-good.

I loved the expansion of showing that there are more out there like Eleven and that not all of them are good like her. Although Eight didn't show that she was malicious, as she could have killed those cops but instead just tricked them, she was clearly still stealing and in a criminal element. So she's not exactly a saint. But I love that. It makes me very curious to see how many other numbers there are out there. My theory is that most of them are dead and we'll only be treated to a select few, rather than there being a bunch to be revealed.

How about that scene with Mike trying to contact Eleven? Talk about heartbreaking. It's moments like those that really show off these kids' talents. This isn't an easy scene to pull off and he nailed it. Just like the Duffer Brothers, who continue to understand exactly what to give the fans, while also providing so many twists and turns that it falls into the rare category of unpredictable.

And how about that Eleven reveal. I'm sure the next episode is going to show exactly how she got out of the upside down but it really made me appreciate the marketing for this show. I've figured that most of the promotional stuff was from episodes 1 and 2 as to avoid spoiling Eleven's big inclusion in the group again, since she's gone at the end of Season 1. But damn near everything has only shown Eleven with the short hair again, despite her longer locks that are already on display. I think it means we're in store for a very surprising season, unspoiled by trailers--a rarity in this day and age.

I feel like I'm going to get really repetitive singing this shows praises so I guess from this point on you need to just assume the episode is phenomenal unless I say otherwise because goddamn, this show is phenomenal.

Millie Bobby Brown really gets to shine in this episode, showing more range than we got from Eleven in Season 1 (that's not a knock, more that she's developing a less stoic personality with bits of lunacy peppered in). I already can't wait for her to reunite with Mike. Their scene in the basement was heartbreaking. Made me wonder just how many times she had seen Mike, knowing he still was looking for her.

Are we getting a Gizmo style monster in the next ep? That's seems to be whats in store and, goddamn am I beyond excited for that. This show just takes every right step when it comes to story progression and including so many different elements from beloved films from the 80's while still maintaining its originality.

Side note: I had someone ask me if I thought IT was a rip-off of Stranger Things and was dumbfounded. Ohhhh my generation, everyone hates you/us.

So it definitely looks like we're getting a little Gremlins mini-story going on. I really like Dustin, but his odd connection with the little monster is so obviously going to turn bad that I'm surprised, given his nerd status, that he doesn't see that. I feel like writers sometimes don't give enough credit to nerds for their recognition as these types of scenarios are what these types wish would happen to them in real life. I know I did.

I also made the mistake of watching episodes three and four back to back without writing a review in between, so those two episodes have kind of blurred together a tad. So forgive me if I screw something up.

How great is it that the standard parental advice of "Stand and face your attackers" ended up completely biting Will on the ass. I mean, I'm not sure that Sean Astin's character is ever worth really taking any advice from. Speaking of which, I definitely thought Astin was going to be someone working for The Man (this is what I'll be referring to those dummies since I don't think they've been given a specific name... outside of the Department of Energy haha). He seems to be just a goofy Radioshack employee though, without even the hint of maliciousness. I hope that sticks.

Oh! I know! This didn't happen this episode but how great is the hint towards a past relationship between Hopper and Joyce. I like that it's not directly addressed but really tenses up any scene that they're in together.


Chapter Four: Will The Wise

I really wasn't expecting Eleven to get an actual name. I'm not sure why but it just never occurred to me that it was even something that would be brought up. I like the name Jane but also felt it was a little... plain (pun definitely intended). I think that scene when she goes and sees her mom through the radio for the first time may have been enough to earn her an Emmy. It was that good.

I'm glad that Nancy and Jonathan weren't actually stupid enough to get caught by The Man. It's always a pleasant surprise when character exceed my own expectations of them and, after Nancy's ridiculous proclamation that she had killed Barb (she didn't... at all. That's a dumb level of guilt. Quit being a dummy, Nancy), I wasn't sure if she'd redeem herself. Well boom, redeemed.

Next Up: Tales of Halloween
at October 27, 2017
Email ThisBlogThis!Share to TwitterShare to FacebookShare to Pinterest