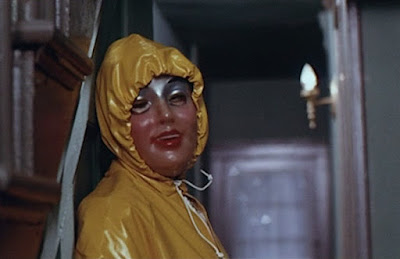 There are few films that are comfortable putting children in such a dark light but this movie doesn't hold back from moment one. I can't imagine this film being made today, especially with how close the setting is to the church so I revel in what this film delivers. It's so much more brutal, and in such unexpected ways, that it felt like a whole new experience.

Alice is such an interesting character. She's both extremely vulnerable while also being deceptively evil. I enjoyed the little twist that comes in about halfway through the film and honestly just expected Alice to be the killer the entire time. So it was a nice surprise, especially given how evil the revealed killer ended up being.

And how fucking cool is that mask? I've always enjoyed the raincoat/trenchcoat look for killers and this is right there at the top of the list. I especially liked how much it was able to provide red herrings by the sole fact that a bunch of kids have that yellow coat.


Next Up: Prom Night 2: Hello Mary Lou
at October 14, 2017
Email ThisBlogThis!Share to TwitterShare to FacebookShare to Pinterest