It's not gonna happen. I really thought I could do it but it seems that life had other plans.

For those in the know, I've been working on the sequel to The Crimson Summer. My goal was to release the book on Halloween. Unfortunately, this isn't me going "hey, the book is here and ready to go!" I really wanted to make that happen but the more things began to pile up, the more I knew the quality would suffer if I just tried to rush it to hit a deadline. And seeing as how my goal for this book is to make it as high quality as possible, I didn't feel that was fair to the readers.

The one lesson I really learned from the first book (and as obvious as it may be) was that the book is there forever. All the dumb little mistakes will always be staring back at me. I rushed the editing on Crimson Summer in order to hit a release date and I regretted it immediately. It's still acceptable and complete strangers have failed to point it out in their reviews, so it must not be too jarring. But I hold myself to a very high standard. So I really wanted to rectify that this time around.

Because of this delay (is it a delay if no one really knew my planned release date?) I do have something special. There's been a hell of a lot that I haven't even released about this book so the least I can do is a little bit more info. So how about the plot?

Liz and Chase were key survivors from the Camp Watanka Massacre. They knew The Killer would be back. They just didn't know when.

Returning to high school, Liz and Chase do what they can to survive, as the Killer returns and the body count rises all around them. Can they survive? Do they even want to?


Unfortunately just providing a plot blurb isn't exactly groundbreaking. I felt like I needed to do things with a little more pinache. A little more zest. A little more... I'll stop. I received so many compliments about the cover for the first book that it was a no brainer to bring back by artist for book two. He's done an absolutely fantastic job, recreating something that's been in my head since I thought of the sequel.

So here we are with the cover for my second book, Crimson High. 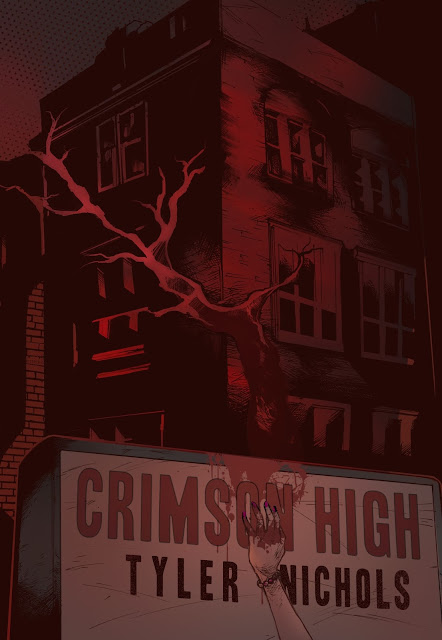 How fucking cool is that? I still can't get over how great it turned out. I've had this cover in my head for so long that I've day dreamed about a million and a half tweaked versions and yet somehow Alvaro was able to absolutely nail it. I can't express enough just how excited I am concerning this book and the cover kicking so much ass just makes me even more pumped!

I hope you join me for another ride into my little slasher world.

COMING SOON!
at October 31, 2017
Email ThisBlogThis!Share to TwitterShare to FacebookShare to Pinterest