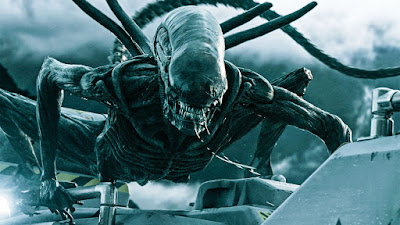 I hated this movie. I hate it with such a passion that it took me four times to finally get all the way through it. I can't stress enough how rare it is for that type of thing to happen to me. Did I mention I hated this movie?

This entire crew is on a colonization mission and yet, throughout the movie, the crew that is in charge of keeping those pods of people alive constantly puts them in danger. Danny McBride, after assuming command of the ship since the Captain is below on the planets surface (with his wife) decides to go on a suicide mission to save his wife (who is actually dead so he'd be saving no one). It's asinine.

One common defense regarding the movie was that "at least they used a 'man in a suit' for the Xenomorph" and to that I say... did you even watch the movie? 100% of the time there is movement we are treated to a CGI alien. At no point does the creature look real or anything more than a really quick and physics-defying cartoon. Argh!!! This has made me so angry!

I'll end this here before I go off on a tangent about how Ridley Scott hasn't made a good movie since Gladiator... too late.


Next up: Stephen King's IT
at October 02, 2017
Email ThisBlogThis!Share to TwitterShare to FacebookShare to Pinterest