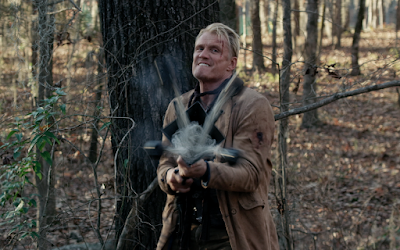 I've had more difficulty as of late trying to keep up with the marathon but dammit if I'll miss a day! I may just have to make some detours and see watch some previously seen films since they take less effort. But you know what? That doesn't start today as I've got another new one for the pile!

I'll be perfectly honest, I chose this movie for one reason and one reason alone: Dolph Lundgren. I think that's a reasonable excuse but some of you may not understand the magnitude of this decision. It's fucking Dolph Lundgren! And I can't say I was exactly expecting Oscar worthy material from such a selection but it turned out pretty fun.

Things really ramp up to 100 right from the jump. This wasn't afraid to kill just about every character that's introduced, including a dog! I was also pleasantly surprised by the appearance from Jason X and My Bloody Valentine 3D scribe. I've always enjoyed the

Kristina Klebe looks like she could play Robin Wright's sister, which is surprising since she starred in the Halloween remake just a decade ago. The years have not been kind. That's not very nice. It just really took me off guard when she first came on screen. It's not to say she looks bad, she just looks older, and the Robin Wright comparison seems like a halfway decent option as not being too offensive. Still, it's October 2017 and this is a hot topic issue so I've pretty much written myself into a corner and should probably just end this now.


Next Up: Ghost Team
at October 24, 2017
Email ThisBlogThis!Share to TwitterShare to FacebookShare to Pinterest