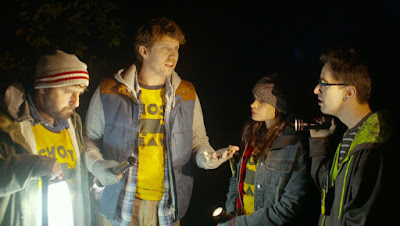 Jon Heder in a ghost hunting movie with some of the best character actors under 40? If you're like me, you saw this movie pop up on Netflix and thought "How the hell did this movie get past me?" Well the answer is pretty simple: It's only kinda okay.

Boasting such a great cast meant my expectations may have been a little high, but ultimately there just weren't enough laughs going around. The film never really got going and always seemed to be servicing a plot that wasn't really important. I wish they had gone with more of a Scooby Doo angle than the angle that was used.

Justin Long steals the show every time he's on screen and this is coming from someone who isn't always his biggest fan. I think what works so well is that he plays against type and is more of a brainless military weirdo than his usual schtick. And he fucking nails it. I would watch several more movies with his character.

In the back of my head I keep hoping that this film will be better on a rewatch but I doubt it's gonna happen. Instead I'm just left with an average movie that should have been a lot more fun than it was. Damn you, Netflix!


Next Up: 1922
at October 25, 2017
Email ThisBlogThis!Share to TwitterShare to FacebookShare to Pinterest