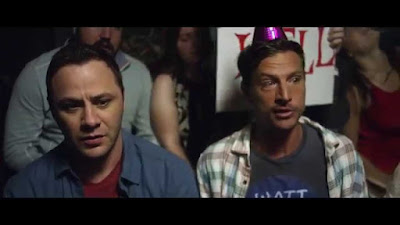 This movie is so fucking silly. It's almost like a Scary Movie film in terms of going for laughs, but from a non-parody aspect so it comes off... just odd.

The movie itself is about a guy and his stepbrother moving to some ideal town that happens to have a serial killer problem. Oh and he's also the son of a serial killer but this is so irrelevant to the plot other than to serve as a way to get him out of town. It just felt pointless. I was really wanting to like this movie but, being a comedy, I wasn't laughing.

There's an amusing subplot involving Simon Rex's character being closeted that gets beaten into the ground a bit much. I felt the payoff was funny enough that they should have cut some of the earlier references to make it pack more of a punch and be less obvious. Either way, I'm surprised a juvenile film such as this even had that kind of angle.

I guess I was tricked by the cast looking pretty impressive as it included Jim O'Heir, Ray Wise, and Danny Trejo but it didn't live up. Their cameos are slightly amusing but not really much more than that. This is one of the unfortunate parts of the horror world, it can be a rough reminder of just how much shit the genre holds. This falls into said "shit" category.


Next Up: Annabelle: Creation
at October 20, 2017
Email ThisBlogThis!Share to TwitterShare to FacebookShare to Pinterest